While popcorn is today one of the world’s most popular movie snacks, it’s actually been enjoyed in the Americas for thousands of years. Popcorn comes from a unique type of corn that produces small kernels with a hard exterior shell and a tiny drop of water inside. When the kernel is heated, it turns the moisture inside into steam, eventually bursting the hard sell and releasing the flaking interior to create what we recognize as popcorn. Here’s a look at the interesting history behind this classic American snack food. 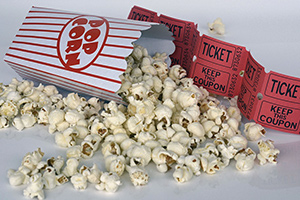 Popcorn has actually been consumed for tens of thousands of years. Far below Mexico City, archaeologists have found 80,000-year-old corn pollen that is nearly the same as modern popcorn, leading researchers to believe that ancient cave people in Mexico likely consumed popcorn. It’s believed that popcorn was first grown and discovered in Mexico or Guatemala, although it also appeared in China (960-279), India, and Sumatra before Columbus sailed to the Americas.

The oldest popcorn discovered was in central New Mexico in “the Bat Cave.” This popcorn has an estimated age of 5,600 years. Archaeologists have even found ancient popcorn kernels in Peruvian tombs that are preserved so well that could still be popped.

While not as common, archaeologists have even found popcorn that is still white and fluffy — after the dust is removed! A cave in Utah turned up fresh-looking popcorn that was about 1,000 years old.

How Was Popcorn First Consumed?

When Europeans arrived in North America, the popular way for Native Americans to consume popcorn was holding an oiled ear of corn on a stick over a fire until the kernels popped, then chewing off the popped kernels. Of course, natives also found other ways to enjoy popcorn, including soup and even popcorn beer.

European-Americans likely encountered popcorn for the first time after the Iroquois nation spread throughout the Great Lakes and introduced the popcorn variety of maize to settlers in Vermont, Quebec, and upstate New York. Sometime around 1612, French explorers reported meeting Iroquois who used hot sand in a pottery vessel to pop popcorn. In fact, it was here that popcorn makers first began selling popcorn to consumers. During the Colonial Age, housewives often served popcorn with cream and sugar as a breakfast food. By the middle of the 19th century, popcorn was a popular snack for families to enjoy in front of a fire.

Mass consumption of popcorn in America took off in the 1885 when Charles Cretors, a Chicago entrepreneur, built the world’s first popcorn-popping machine. Cretors owned a candy store and bought a commercial peanut roaster to offer fresh roasted nuts. Unhappy with the machine, he tinkered with it and later built new steam-powered machines that could roast nuts and pop popcorn. This machine was able to heat kernels evenly for the maximum number of popped kernels while allowing kernels to be popped directly in seasonings.